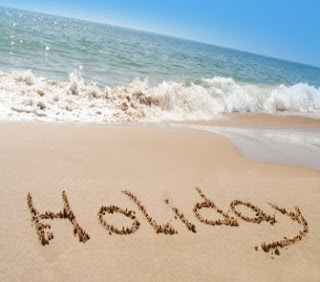 Before coming here, I knew that Americans had a reputation of working too many hours and not getting enough time off from work to enjoy life and...well...go on a proper "holiday". Indeed, after living here for a wee bit, I think that we do have a thing or two to learn from the British sense of priorities. Holidays are one important part of life.

Although there is a lot to say for a cross country road trip, the U.S. doesn't offer as exotic of holidays in as accessible of a way as the U.K. Afterall, if you live in the heart of Texas, just going somewhere like Las Vegas on a "holiday" would be more expensive and involved than taking an EasyJet from Edinburgh to Amsterdam or even Cyprus. Still, I do think that it comes down to cultural priorities. I am not sure what ours are on but they aren't nearly as keen on a decent holiday.

Example? I work 2-3 days a week as an hourly (minimum wage - at least the exchange rate is in my favour though) housekeeper. I get more paid days off as an employee than any job I have ever had. Ever. School district, the city, private employers.

Are you ready for Exhibit B?:
There are network telly programmes here dedicated to get the most (and what you deserve) out of your holiday. I present to you Save My Holiday (not sure if it will play for you overseas folk) from BBC 1 Scotland. Ironically, I discovered this programme whilst making beds and dusting furniture at the hotel where I work. How to describe this programme...? 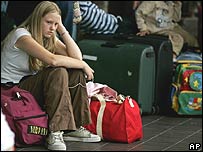 It is a documentary with two hosts who follow different Brits that phone in with issues about their holiday. From the intro to the programme:
"We're going to coach you in the art of complaining...so you get what you paid for. Don't put up with second best."

Problems range from cleanliness or safety issues in hotel rooms, sub-par food at the hotel, misrepresented amenities at destinations, and what turns out to often be the most dramatic at times, bouts of food poisoning. Here is one story from "episode 7" (still available to watch for 6 more days on BBC 1 Scotland). Two friends are on holiday at a resort and they start to feel ill on the second day.

Host: "....that's when their holiday...hit the skids." <cue in super super dramatic music-kind of like "America's Most Wanted") On only their second day their paradise holiday had taken a depressing nose dive. Shortly afterwards, Sharon was also shot down with the same bug." ---- pans to a zooming view of a toilet (a la "CSI")

There are lots of other great moments "Save My Holiday" has to offer. And if you are ever in the market for tips on how to maximize your entitled holiday days, I would heartily recommend watching an episode or two before planning your trip. That way, you won't end up like Sharon and her friend - needing to phone into "Save My Holiday" for help. You will be a savey consumer that knows how to make the most of those 28 days a year you get.
Posted by cate at 9:59 PM

Email ThisBlogThis!Share to TwitterShare to FacebookShare to Pinterest
Labels: culture?, tele and cinema

cate
My 6th grade teacher once described me as "not a bad student but just one with a lot of personality". To that I say: thank you?

Forgive the classifying librarian in me...